A few months ago- never thought I’d say that, it’s probably a sign that I should quit while my dedication’s still intact- I posted a post about the subliminal misogyny in the music industry, or more specifically, in rap music. You can find that post HERE. I don’t listen to a lot of rap, probably because when I see the names Tyga and Pitbull I think I’m on the RSPCA website not the iTunes charts and exit in a blind panic to go and find Adele’s new album aka real music elsewhere, so last time when I forced myself to listen to and analyse 10 rap tracks for my blog my ears genuinely bled a little bit. But what changed? Well Teamales, it’s rather simple: Fetty Wap. Now I really can’t explain why I feel like every ‘yeahhhh baby’ is addressed to me personally, but I do and this has left my internal struggle at an all-time high because, as those of you familiar with his music will recognise, he’s not the most respectful to the part of the population without penii. Every time one of his songs comes on my emotional confliction is triggered, half of me is all ‘Fetty don’t treat women like that!’ but then the bit that shuts up and dances is like Fetty PLEASE can I be your trap queen. And so because of this, I am motivated enough to write about rap again. But bear with all the stupid rapper names- I can’t pronounce them either. 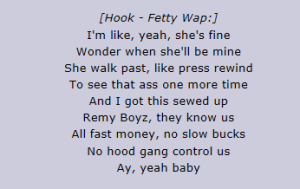 Do you feel my confliction now? I literally have no idea what then title means- although realistically it’s probably something sexual, I’ll let you urban dictionary that one in your own time- but the song itself is such a *Nick Grimshaw’s Radio 1 advert on Spotify voice* ‘banger’ that I am put off dancing to by the creepy language. I can’t help thinking maybe she’d be yours a little quicker Fetty if you spent less time looking at her ‘ass’ and more time telling her she’s as ‘fine’ as you think she is. Actually no, look up ‘fine’ in a thesaurus. ‘Fine’ is for British people trying to express their emotions without involving themselves in the conversation, not for your future wife. However the briefly mentioned sewing skills could be commendable.

Freak of the Week Krept and Konan ft. Jeremih

What a charming piece of literature we have here- unless of course the word ‘freak’ no longer means a bit of a weirdo which would be a perfect example of Tumblr ruining my childhood with sexual connotations again- I especially admire how Krept and Konan are dedicated enough to crown a different freak every single week. That’s commitment and a half. However the rest fails to impress me especially the ‘beep beep’ which will prevent me from ever watching Noddy in the same way again. And the whole referring to a woman by her body parts, I didn’t realise people still did that seeing as (as Back to the Future reminded us all this week) it’s 2015, what happened to #FreeTheNipple and Fat is a feminist issue? Oh wait, none of that exists in rap.

It may seem like I’m making swift judgements but (I can’t believe I’m about to try and justify my judgemental-ness. You’re an ENFJ Jess just accept that you were born this way.) I haven’t specifically picked these songs because I knew beforehand that they had sexist lyrics, I’m literally just picking them at random from the current rap top 100 chart- which if anything shows how accessible this misogyny is. This example comes from a guy that can’t even spell his own name and follows on the transport theme with a nice plane metaphor. Or at least it was nice until he started telling (not asking) his ‘bitch’ (how endearing) to stop being so frigid. If I was her I’d eat his passport, tie him to the baggage carousel at Gatwick airport and leave him to try explaining that to border control- I’d show him what a real bitch looks like.

We can already guess from the title what this is going to be about- although with a name like Kid Ink I’m surprised if he’ll be old enough to book a room without his parent’s permission, if not Chris seems to be quite happy sharing with ‘two of his bitches’ so if I’m honest it could be a blessing in disguise. It might’ve got a little cramped in there anyway. What I dislike most about this song is that both men assume the girl is looking suggestively at them when actually we all know she’s staring into space and thinking about all the things she can buy when Corbyn scraps tampon tax. Duh. Why else would anyone stare suggestively at Chris Brown unless it was completely by accident? Especially if they know he’s vile enough to disregard his girlfriend and disrespect you by ‘playing’ both of you. Dream on lads, you can look but you can’t touch.

Finally, I couldn’t blog about distasteful music without mentioning THAT song where Tyga controversially discusses Kylie Jenner’s vagina in beautifully cryptic language such as:

And this, ladies and gentlemen, is why we need pop culture to embrace feminism because, by charting, these lyrics suggests that speaking to/about women in this way is acceptable. Which it totally is not. Unless you come from planet Meninist. In which case: jog on.